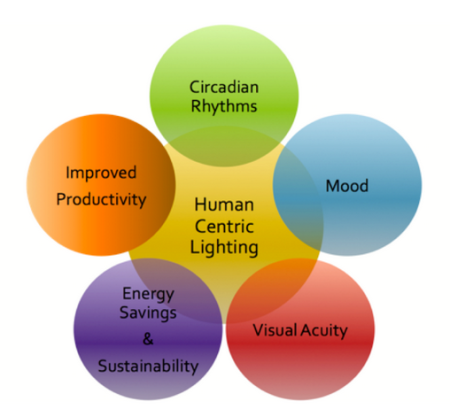 According to the US Census Bureau, as of April 1, 2010, there are 40.3 million people who were 65 and older in the United States, accounting for 13 percent of the total population; this number will more than double to more than 88 million by 2050. Many industries, organizations and communities are planning for the graying of America, one being long-term care living facilities where, according to the National Center for Assisted Living, as of 2008, more than 900,000 people nationwide live in assisted living settings.

Making these facilities welcoming, intuitive to older adults’ needs and even redesigning the lighting greatly affects this populations’ quality of life.

It has long been understood that poor lighting is not only associated with an adverse environment, as we all relate to the mental image of the “dark dungeon” or “dimly lit alley,” but that there is a cause and effect relationship with human health. The most prominent example is season affective disorder syndrome, or SADS, which is a winter-season depression that effects sensitive individuals in the higher latitudes where the day/night cycle is more extreme, right up to the Arctic or Antarctic circles, where there will be winter days when the sun will literally fail to rise fully above the horizon. Experimentation with “light therapy” proved effective in extreme cases, adding momentum to a new realm of studies of the interaction between light and humans.

According to a paper by the Center for Health Design, “The Impact of Light on Outcomes in Healthcare Settings,” light impacts human health and performance by four main mechanisms:

As people age, their eyes also undergo changes. The lens and cornea begin to yellow and darken, and the pupils shrink in size. The aging eye also changes to have a high degree of light scatter as cataracts form, and the field of vision becomes limited. For this reason the colors that are chosen for the elderly should remove any yellowing and brightness since the eyes of a 60-year-old can only filter a third of someone age 20.

Additionally, elderly persons may have difficulty distinguishing between colors. They need three times the amount of light to see, but are sensitive to glare. Colors such as red, green, yellow or blue will appear muted to the elderly eye.

Light and Sleep Cycles
Because of changes in the transparency of the eye’s lens, the elderly are especially susceptible to sleep disturbances as the amount of circadian light received through the eye is diminished. Disease-specific biological changes, as experienced with Alzheimer’s and dementia, contribute to sleep disruption and are experienced as difficulty falling asleep, frequent awakenings, decrease in slow-wave and REM cycles, shorter duration of sleep and frequent daytime napping.

Light serves to synchronize the human body bio-chemical clock. For instance, it has been found that blue light (465 nm wavelength) can reduce the melatonin in our blood stream, making us more alert – this is what sunlight produces from morning until afternoon. However, as the day progresses, the intensity of the blue-spectrum in sunlight reduces while there is an increase in reds and purples, thus triggering the increase in melatonin that enables sleep and body repair. The effect of light on melatonin, alertness and cognitive performance is blue-shifted – a lamp with a correlated color temperature of 6,500 K (cold light) induces greater melatonin suppression and an enhanced alerting effect than does a lamp with a CCT of 3,000 K (warm light).

Light directly influences the amount of melatonin, and other related hormones, that a person’s brain produces, which indirectly affects alertness. With artificially driven imbalances, it’s not just sleep that is affected; almost our entire metabolism, including immune responses, is regulated in this way, and there is the potential for more serious health effects. Conversely, supplemental melatonin has been indicated with positive health effects including slowing down aging processes, and potentially slowing or reversing brain-involved conditions, including Alzheimer’s.

Hard-to-reach lighting controls and bright, glaring room lights add to the difficulty seniors have getting up in the middle of the night. Additionally, nurses may need to check residents several times at night and often disrupt their sleep and comfort by repeatedly turning on the room lights.

Conclusion
Poor lighting can accentuate existing vision problems and reading difficulties among the elderly, it can cause depression and disrupt sleep cycles. However, improving long-term care facilities’ lighting is documented to improve residents’ health. These studies have shown that the quality and type of lighting can have a significant impact on our health and comfort, particularly for anybody who spends long periods in artificially lit buildings, such as the elderly and the infirm.