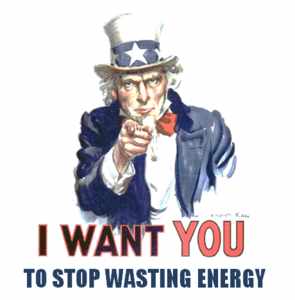 The remaining presidential candidates have an opportunity to distinguish themselves in the upcoming primary by adding a key level of detail to how they would reduce government waste, help our Veterans, create jobs, reduce CO2 emissions, and also fund the fight against ISIS. Changing the lights never looked so bright!

The remaining Republicans (Donald Trump, Ted Cruz, John Kasich, and Marco Rubio) and the remaining Democrats (Hillary Clinton and Bernie Sanders) have all talked in different ways about health care, job creation, and combating terrorism. A War on Energy Waste starting in government buildings will help fund each initiative and also build a long term foundation for strength and American Energy Independence.

The delegates that are at stake on March 15th are significant, and the stats collectively have a vast number of military and government buildings that could all benefit from reduced energy costs. The state to delegate counts is as follows:

Here is why a fresh message with actionable intelligence can help candidates from either side of the aisle. America has fatigue from the extraordinary costs of the War on Terrorism, War on Poverty, and War on Drugs. In each case, the high cost of time, treasure, and human life has delivered results that are far lower than expectations. A War on Energy Waste is WINNABLE given the high Return on Investment (ROI) from technology such as LED lighting that is available today.

The order of magnitude is tremendous based on data from the General Services Administration (GSA) and LED performance metrics. The military and VA occupy more than 2.2 billion sq. ft. of buildings which is two thirds of the total 3.4 billion sq. ft. of federal government property. At $1 per sq. ft. to retrofit with LEDs, the annual energy savings is typically $.33 per sq. ft. or higher. The government could save more than a billion dollars every year just by changing the lights and save more than 10 billion over the decade long life of the LED technology.

The billions in energy savings from a War on Energy Waste can serve many much needed purposes:

By launching a War on Energy Waste, the government can go beyond job training to also create opportunities for Veterans to work on many aspects of lighting retrofits. According to the US Energy Information Administration (EIA) there are more than 87 billion sq. ft. of commercial real estate in the US. With $1 per sq. ft. to retrofit and one new job created for every $150,000 in lighting retrofits, the employment ripple effect is over 580,000 new jobs. The employment includes counting lights to prepare savings analysis, utility rebate administration, installation, project management, engineering, and product production. Many of the jobs involve Science, Technology, Engineering, and Math (S.T.E.M.) so the clean-tech work is foundational for 21st century careers. The national energy savings will exceed $287 billion over the next decade and yield over 3.4 trillion lbs of CO2 emissions reduction, the equivalent of taking about 30 million cars off the road.

As the CEO of Independence LED Lighting, I brought our LED manufacturing from China to Pennsylvania in 2010. We are one of multiple companies that have just scratched the massive potential of energy savings and job creation. Beyond our Fortune 100 and small business accounts, we have seeded the public sector with installations at the VA Medical Center in Durham, North Carolina, the US Marine Corps Base Quantico in Virginia, and over 30 US Navy ships for Military Sealift Command (MSC).